Yesterday it was cloudy with the heavy, gonna rain feeling that you get in the spring when the temperatures get a bit too warm and storms are predicted. And they were predicted. For two days my weather app on my phone had come with with “weather alerts for your area” talking about the severe storms followed by wintery precipitation. Oh joy, I said, since I am not a fan of severe weather. It reminds me of the fact that I never was able to wrangle a storm shelter, so I live in a very old trailer on top of a hill. Whoosh!

Luckily while we were under a storm warning, there was very little damage here. Okay, the trash can was blown over, and I had to park in a puddle with my leaky boots that I’ve duct taped the sole back onto in order to stand it upright when I took the trash down the hill today. But in the grand scheme of things, we were blessed and other people weren’t so lucky. My heart goes out to them.

This morning the temps had dropped a good 25 degrees and it was colder when I fed the horses and gave them their weekly round bale. Looking out the window now, I hear the sound of sleet and see it accumulating on the top of a garden decoration.

Winter has come to the Ozarks.

It won’t last. We’re supposed to be in the fifties again by mid week, and this winter has been warmer than average. My heating bill and for those who heat with wood, the purchasing and/or chopping has been less. We’re all thankful. But considering that it is the middle of January, for our first winter precipitation? Well, that’s not bad. It’s also climate change. And in about twenty minutes I’ll put on my leaky boots and my coat and go out and give the horses their afternoon feed. And I’ll give them a couple of peppermints so they have a treat on what’s going to be a chilly night. 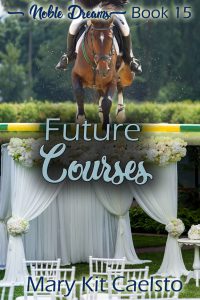