This story is part of a monthly flash fiction challenge I found. This month’s prompts were the genre of a fairy tale, a big city studio apartment and a potted plant. Driven from my love of Sex In The City and Drag Race, here is a meet cute between a genderfluid drag queen and a gay photographer.

Something Magical, Something Blue

The dark blue glittery Jimmy Choo wrapped in my clean sweatshirt I carried in my messenger bag would lead me to my queen. It had to, because the shoe fit my own size 9 feet, and I love a man with good taste in shoes. I’d found it left in the dressing room at the Lipstick Lounge after their drag show, a really classy event for a place with less. But the show had blown the doors off, and my photograph of Cinder Hella had gone viral on Instagram. I wanted to return the shoe and thank him myself.

It hadn’t been hard to track down the man beneath the wig. Cinon Delbar had messaged me from my photograph, asking if I wouldn’t mind taking more pictures. Of course I’d agreed. When I recognized the shoe from my photo, well it was magic or kismet or something. Sure, I might be a mage, self-taught not a member of one of those stuffy organizations, so maybe magic had something to do with it. I preferred to think it was my fabulous skills as a photographer. My father might have been upset when I chose to move to New York rather than go to college and get a degree in magical politics like him. One professor in the family was enough, thank you very much.

I reached my subway stop and stepped onto the platform, weaving my way through the crush of bodies heading up to street level. Okay, so maybe that was magic. I was meeting Cinon Delbar, after all. Couldn’t arrive looking a mess.

Following the directions he gave me it was a quick five-minute walk from the station to the place he’d mentioned for the shoot. I didn’t recognize the address and Google Maps told me it wasn’t a business. Could it be his place? I arrived at the building, told the doorman who I was there to see and let me in. Nice. The elevator took me to two floors below the top, where I was directed to a polished wooden door at the end of a corridor. It looked like this place might have been a hotel at one time, now turned into a bunch of studio apartments. And not rent controlled ones either.

Footsteps came toward the door and a moment later it opened. “Sebastian, I’m so glad you made it. Come in. Come in!” Cinder, not Cinon, stood before me, a dazzling blue sparkling gown that would match the shoes perfectly. If it weren’t for the bald head and a face not quite finished, I would have thought I’d come to a show. “I’m so sorry I’m half-baked. Why don’t you come in and sit. I thought we’d do the pictures in here. I’ll be just a moment.”

“Thank you,” I said, following him into the seating room. A large prayer plant grew from a blue pot on a white table in front of the windows overlooking the street. Two chairs, both blue like the pot, sat next to it on a big white rug. I was glad I’d used magic to stay clean. I sat just as Cinder dashed into the bathroom. “I, uh, brought a shoe I think you left at the show.”

I sat there and admired the view and the large open spaces. A corridor with a large marble-topped island created a kitchen with a fridge, stove and microwave. A bend in the wall obscured the bedroom on the other side. A little zing hit me at the thought of being so close to Cion’s bedroom. But before I could contemplate what that might mean, Cinder emerged from the bathroom looking as fabulous and fierce as always.

“Tada!” Cinder twirled in bare feet, the mate to the shoe I had held in one slender-fingered hand. “What do you think? And just show you know I’m she/her when I’m Cinder.”

“You look amazing. And Cion?”

“He/him,” I said. “And I can’t walk in heels, but I know you can.” I reached into my bag and pulled out my sweatshirt. I gently unrolled it, assuring him that it had been freshly washed and I felt like this Jimmy Choo needed some protection.

“Oh honey, don’t we all?” Cinder laughed and lifted her foot. “Shall we see if it fits?”

“Sure!” I’d expected to hand it to her, but this kind of made me feel like Prince Charming. I knelt before her and slipped the shoe on her foot. My fingers lingered over the slope of Cinder’s foot, completely taken away of just how beautiful these shoes looked. “It fits,” I said with a little breathy sigh.
“I’m sure it would. After all, you’re not the only one with magic.” Cinder winked. “Are you ready to take my picture, my prince?”

I stood and reached for my bag to get my camera.

Cinder caught my wrist. “I’ll kiss you later. I don’t want to mess up my face.”

A blush heated my cheeks and I glanced away feeling like a high school boy instead of someone approaching thirty. Cinder reached for me and touched my chin, turning my face to meet hers. “Do you think a queen leaves one of her favorite Jimmy Choos behind on purpose?” She released me and flicked her fingers down her body. A smattering of silver sparkles erupted from the end of her fingers to cascade around her like a thousand tiny stars. A glamourist. At least now I knew her school of magic. “Now, I’m ready for my photograph.” She turned and sashayed toward the prayer plant. “I’ll turn into a pumpkin at midnight, honey. Let’s get started.”

Author’s Note: If I got something wrong or didn’t use a turn of phrase that was appropriate, please let me know. I had a lot of fun writing these characters, and I hope you enjoy them. 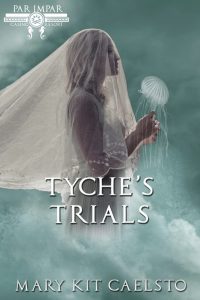