The Band Is Back Together (Sunday Horses)

When I bought the property the seller had a lot of horses. Two of them, my Thunder’s dam (that’s mom in horse speak) and an older palomino mare, went to live with the neighbor. From time to time they’d come visit, since they didn’t know that Thunder had been gelded, and well they had an “itch” to scratch. I’d spoken with the neighbors about a year ago about taking the horses in if they no longer wanted them/wanted to care for them any more. This week, it happened. The two horses came back to live with me. The “band” such as it is has reunited.

I’m thankful really, because it was a soft landing for them and because most of the horses had been in a single herd at one time, with just a little reminding of who is boss (that’d be my senior mare Fortune), everyone settled back into their usual routine. We played “musical horses” a bit at feeding time, but even there they found their places, two by two, and feeding time doesn’t have many issues.

We have several horse sales around here, and both the neighbor and I agreed had these two horses, one very senior, the other very standoffish unless she knows you, gone to the sale they probably would have found their way to the kill buyers. Also, there’s no way in hell I could say no to Thunder’s dam (Firefly’s granddam). I mean, how could I break up the family? Especially when Firefly and her granddam would nibble withers and obviously got along very well. Almost as if she knows that Firefly is part of her family.

I’ll post pictures later. The senior mare is underweight and I’d like to get her looking much better before I share pictures. We’re on a structured refeeding program right now hopefully that’ll pay dividends here within the next 30 days or so. But, for now, I’m thankful to have provided a soft landing for these two and looking forward to sharing with them the love and care that all horses get here.

Would you like to send the horses some treats?
Liked it? Take a second to support Mary Kit Caelsto on Patreon! 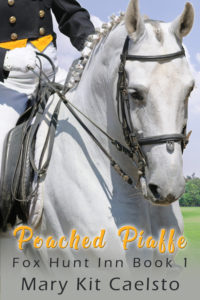