Truth In The Fiction with Anne Krist (Guest Blog)

The fact behind the fiction

Writers always include some truth in their fiction—it can’t be helped. In the same way we all carry past history (some call it baggage) into relationships, writers carry some of their history into their writing. The old adage is to write what you know, right? So what do we know better than our past, our family, our friends? The trick is to make those “facts” not so recognizable that we can get sued or incur the wrath of a sister, mother or friend. The strangest things can happen when you turn your best friend into the evil bitch in your latest romantic suspense. Or use your boyfriend’s physical traits for the character who has trouble…ahem!…in bed. Ouch!

Recently, I republished a book I wrote under the pseudonym Anne Krist called Burning Bridges. Some things, especially at the beginning, had kernels of truth woven into the fiction. Let’s see what.

Fiction: the characters. In no way do Paul or Sara resemble me or my then boyfriend. But…

Fact: I did meet my long-time boyfriend (now husband) in Virginia Beach

Fiction: the situation. My boyfriend was in school during the ending of the Vietnam War, so he didn’t go. But…

Fact: He would have gone had the war not ended when it did. His lotter number was below 1001

Fiction: the family life. Sara’s father was in the Navy and pretty strict with her. He prevented them from getting together. But…

Fact: My dad was also in the Navy and was fairly strict with me. However, he wasn’t underhanded when it came to Jack and me.

Fiction: the locations. The book takes place mainly in Beaufort, South Carolina, Virginia Beach, Virginia and in a rural point in Iowa. Sara lives in Beaufort throughout most of the book. But…

Fact: I did live a good number of years in Virginia Beach, but never in Beaufort. I visited there for research and it’s a lovely little Southern town! Jack and I did walk at Sandbridge a number of times, and I’ve been to a concert at the Alan B. Shepherd Convention Center. Also, I’ve driven across Iowa so many times (and lived there for a short while) that I know the terrain.

Burning Bridges is not a written version of my life, but a good bit of it is drawn on personal history. I wonder how many of you have written your past into your books? 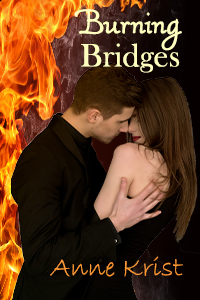 Letters delivered decades late send shock waves through Sara Richards’s world. Nothing is the same, especially her memories of Paul, a man to whom she’d given her heart years before. Now, sharing her secrets and mending her mistakes of the past means putting her life back together while crossing burning bridges. It will be the hardest thing Sara’s ever done.

Sara stared at the letters arranged before her in numerical order. The moment in time she and Paul shared was long ago, yet her dream had conjured his presence as though she’d just seen him. In her mind, his blue eyes darkened with passion before his lips captured hers, and he moaned his appreciation when their tongues met. She tasted his sweetness and knew the steel of his arms as he held her. How many nights had she put herself through hell reliving those memories? Too damn many.

After the concert, they’d met clandestinely on weekends, mostly at Sandbridge, where they could walk and talk undisturbed. With each meeting, stirrings built deep in Sara that pushed her to want more, but Paul insisted they restrain themselves because of her age.

Then the weekend before he shipped out, she’d planned a surprise and her life changed forever.

The kettle screeched, bringing her back to the present. Sara prepared a cup of tea and then picked up the envelope marked twenty-eight. At one time, she would have given her right arm to hold this letter. Now, curiosity and the desire for a brief escape drove her more than the passion of youth. Blind love had faded when she’d had no word to bolster her during the long weeks after the ship left.

First had come the waiting. No letters arrived, even though she wrote him daily. There were no phone calls, no notes, no anything, for days that dragged into weeks then crept into months.

Anticipation morphed into anxiety. She worried he was sick or hurt and unable to write.

One day she admitted that Paul must be afraid to write for some reason, and she feared what he would say if she did receive a letter. That their time together had been a mistake, that she was too young to be in love. That he really loved someone else and Sara had been only a stand-in while he was in Virginia. Perversely, she began to sigh with relief when she arrived home and found no word.

Now, knowing why she hadn’t received mail, what would she feel if she opened this letter and her old fears proved to be true?

“Nothing,” she murmured. “Paul’s dead. He can’t hurt me anymore.” At the very least, his letters might allow her to put his ghost to rest. For that reason alone, she had to read them.

She slid her thumb under the flap and ripped the envelope open. A single sheet held his hurried scrawl. 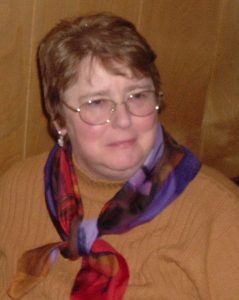 A few years ago, Dee S. Knight began writing, making getting up in the morning fun. During the day, her characters killed people, fell in love, became drunk with power, or sober with responsibility. And they had sex, lots of sex.

After a while, Dee split her personality into thirds. She writes as Anne Krist for sweeter romances, and Jenna Stewart for ménage and shifter stories. All three of her personas are found on the Nomad Authors website. Also, once a month, look for Dee’s Charity Sunday blog posts, where your comment can support a selected charity. 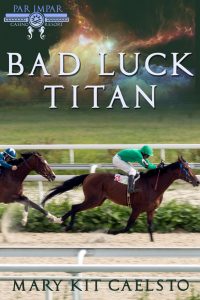