Care and Feeding of a House Duck

When our house duck was the only one of his clutch to hatch, my mom gave him the name SuperDuck, since he must have had super powers to make it through. I’m not sure about that, but the name has stuck. SuperDuck goes outside and gets to enjoy the weather during the day. At night he comes in and makes his bed in a dog create (lined with a cheap fleece blanket and puppy pads) before going out in the morning.

However as we’re expecting snow this weekend (though not as much as originally forecast), he will be staying in. I don’t want to keep him penned up, so we will be trying the duck diaper. For those who have never contemplated having ducks in the house, it’s important to note that duck waste is wet and copious. And people actually make diapers for house poultry to wear.

SuperDuck’s diaper has a jolly holiday print on it and I am hoping to get him in it and get some pictures tomorrow.

Something tells me I’m going to have to write a story where there’s a Musimagia familiar as a duck soon. Because having a house duck is fun. Or at least I think so. 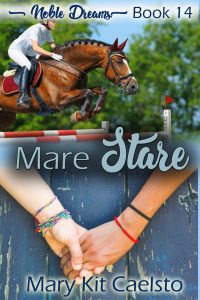